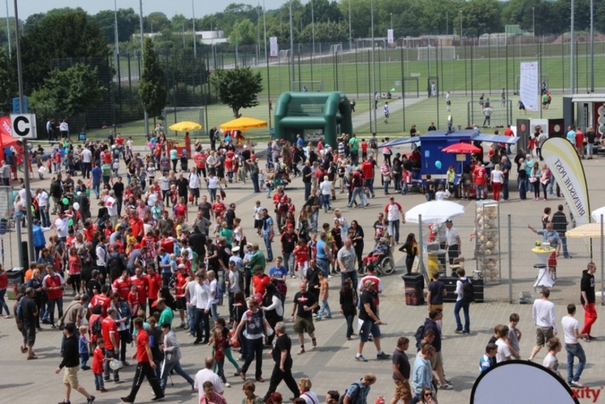 Fortuna will celebrate its own personal triple, from the 17th to 19th of July.

Düsseldorf - Fortuna Düsseldorf organized a friendly game, a fan party and a family day all on single weekend for the whole city. On friday evening Foruna will play against Ipswich Town Football Club at 18:30. Then, at 20 o'clock the big fan party will start in the "Stahlwerk". The traditional family day with an autograph session, show training and other supporting programms will be held on Sunday around the ESPRIT arena. The partner "Stadtwerke Düsseldorf" will be manageing the weekend.

Although Fortuna was always able to invite an international test match before the season, this year's opponents Ipswich Town has a very special history. The ITFC and the Fortuna have a long-standing friendship. In January 2006, the first time a large group of Fortuna fans made the whole journey to the island with around 100 participants, to watch a game from the British tradition club Ipswich Town. Since then, regular visits happen between the two clubs. Tickets for the match against Ipswich can be purchased in different categories.

After the game the first team will celebrate with the fans and the guests from England at the Düsserldorf "Stahlwerk" into the new season. This event will start at 20 o'clock. Tickets for the fan party and the match are available through the online ticket shop, the fan shop at the Flinger and the SCD.

On Sunday the big Fortuna Family Day will end the Fortuna-Triple. As in past years, a big gathering with the fans and the players and the coaching staff will happen. The first highlight of the day will be a show training - the new head coach Frank Kramer will perform with his team in the ESPRIT arena a fun workout. Also, a large autograph session with the entire F95 team and the team presentation are on the program.