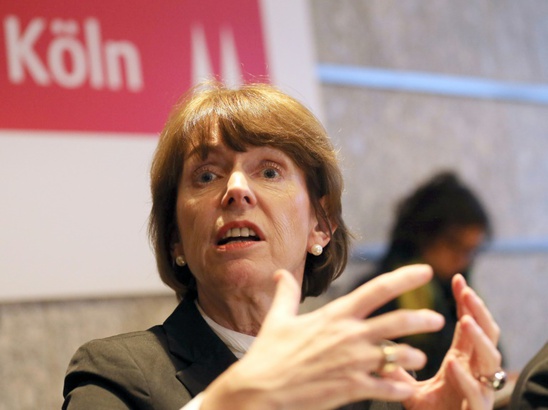 Colognes Lord Mayor Henriette Reker does not have the "slightest concerns" for carnival. (© 2016 AFP)

Lord Mayor Reker has no concerns for carnival

A higher number of policemen will ensure security

Cologne's Lord Mayor Henriette Reker believes that people can celebrate carnival safely and without concern despite the attacks on New Year's Eve in the same city.

Cologne - Answering the question if she would encourage celebrating carnival without concerns, Lord Mayor of Cologne Henriette Reker told the newspaper "Die Welt": "Yes. I do not have the slightest concerns". The city will, in cooperation with the police, provide for more security.

Rekers also said that in order to secure the celebrations that start on Thursday, the city would "employ a lot more policemen" and more members of the public order office would see action as well. On Monday the Lord Mayor will also present a set of measures for when the carnival takes place.  In addition to that there will be "fundamental changes on the presence of security personel".

The Lord Mayor does not think that visitors and inhabitants of Cologne will think that the city is generally more unsafe due to events on New Year's Eve. Reker said "I actually believe that certain parts of the city are now relatively safer".

Reker hopes that if there are no significant incidents during the celebrations, the current crisis mode in the city will abate. She also said: "I would like to see the dark cloud that has thrown a shadow over the city as a result of the events on New Year's Eve to disappear".

On New Year's Eve several women were sexually assaulted and robberies were committed in the area around the main train station in Cologne. The majority of the perpetrators were migrants from North Africa and the Arabian peninsula.