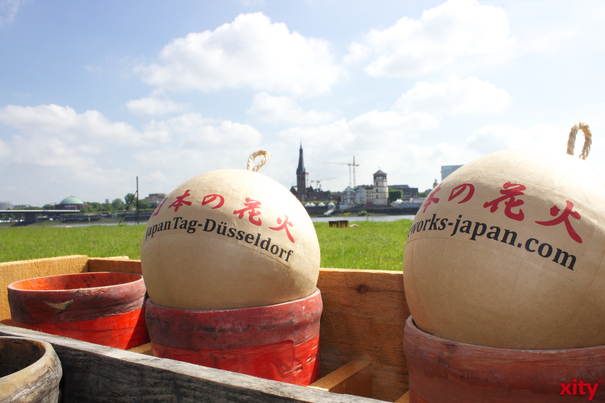 25-minute firework show at the end

At 23:00 o'clock the Japan day will traditionally end with big Japanese fireworks.

Düsseldorf - This years motto of the fireworks was the topic "The art of fashion". The 25-minute firework was designed and preapred in Japan and will be presented above the Rhine between the Oberkassel bridge and the "Rheinkniebrücke". More than 1,500 fireworks will be ignited and will rise up to 220 meters high.

The fireworks is one of the most complex firewroks in Germany and is set by the professionals Japanese pyrotechnicians. They produce the fireworks in Japan and then send it by cargo ships to Europe. Before they get fired, they are being put together in Düsseldorf before the spectacle.

The 25-minute show is divided into five scenes:

It opens a jewelery box and numerous glittering rings appear. The colorful jewels bring the night to shine.

Kimonos are the most traditional Japanese garment. There are usually only in the flowers and butterflies in flora and fauna. In addition to the typical Japanese kimonos fans and umbrellas appear in the sky.

This scene focuses on the new and most copied fashion trend "Kawaii". It stands for a design aesthetic of cuteness. Fits to conjure up in many hearts.

In the penultimate section of Japanese fireworks, bouquets, jewelry pendants and chains appear in the sky and light up the night.

At the end is traditionally the most famous and most popular Japanese fireworks element, the laburnum. The appropriate conclusion of a grandiose fireworks.